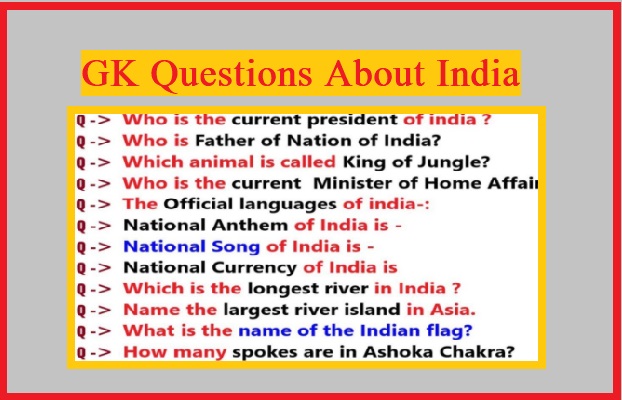 All 36 important topics have been covered in General Knowledge Questions about India in English so that you can practice with them by taking important knowledge of complete GK. If you are facing any problem in downloading GK Questions in English then you can give your suggestion to us by writing in below comment box.

If we talk about the usefulness of Easy GK Questions in English, then it will be useful in the preparation of all types of exams, at the same time it will also make all the questions of your exam very easy. If you download the simplest GK Question Answer about India in English given here, you can improve your GK and also prepare well for competitions. Question 2- ‘Arjuna Award’ is related to-

Question 4- In which field the Grammy Award is given?

Question 5: In which field ‘Norman Borlaug Prize’ is given?

Question 6- Which award is given to the best feature film on National Integration?

Question 7- ‘Ramon Magsaysay Award’ is given by which country-

Question 8: In which field is the Pulitzer Prize awarded?

Question 9- Kalinga Award is given to-

Question 10- For which achievements ‘Global 500’ awards are given-

Question 11- Dhanwantari Award is given in which field-

Question 12- ‘Saraswati Samman’ is given in which field-

Question 14- ‘Nobel Prizes’ are given in the memory of-

Question15- Since when ‘Jnanpith Award’ is being given?

Question16- In which year ‘Dronacharya Award’ for sports coaches was instituted-

Question 17- When were the ‘Nobel Prizes’ started-

Question18- When was the Bharat Ratna and other national honors started-

Question19- C.V. In which year Raman got the Nobel Prize?

Question 21- Who established the Nobel Prize in Economics?

Question 22- Who was the first woman to receive the Jnanpith Award?

Question23- K.K. Which award was established by Birla Foundation in 1992 for outstanding contribution in the field of literature?

Question 24- ‘Vyas Samman’ is given in which field-

Question 25- Which state government has started the Tansen Samman?

Q1. When was Mahatma Gandhi assassinated?

Q2. What is the ancient name by which Patna city was known?

Q3.1930 What was the name of the famous Salt Salt March Satyagraha Yatra?

Q4. Who among the following is called Frontier Gandhi?

Q5.The author of the song Vande Mataram was

Q6. Which Indian was the first Governor General of independent India?

Q7. Who said first that, “Freedom is my birthright”?

Q8. Mohenjodaro is also known by which one of the following names?

Q10. Who is credited with the establishment of Fatehpur Sikri?

Q11. Whose messenger did Megasthenes come to the court of Chandragupta Maurya?

Q13.. Where did Ashoka send his son Mahendra and daughter Sanghamitra?

Q15. who was the last maurya emperor

Q17. In whose court was Patanjali

Q18. Kanishka was the ruler of which dynasty

Q19. where was the capital of kanishka

Q20. In which state does the sun rise first in India?

Q1. By which act autonomy was granted to the provinces in India?

Q2. The advantages of unitary system of government are

Q3. The members of the Constituent Assembly by which the Constitution of India was enacted were

Ans- Elected by the Legislative Assemblies of different provinces

Q4. Where are the emergency provisions in the Indian Constitution taken from?

Q5. The Constituent Assembly of India was formed at the behest of

Q6. Who was the President of the Constituent Assembly of India

Q7. Which type of justice is mentioned in the Preamble of the Indian Constitution?

Ans- Social, economic, political justice has been talked about.

Q8. How is India declared in the Preamble of the Constitution?

Q9. When did India become a fully sovereign democratic republic

Q10. How many times the Preamble of the Constitution was amended

Q11. Where is the word ‘Federal’ used in the Indian Constitution?

Ans- Nowhere in the constitution

Q12. Article 1 of the Constitution of India declares that “India means India” is ………

Q13. In which article India is also called Bharat

Q14. What type of federalism is seen in India

Ans- Formation of states by forming a union

Q15. When did the Indian Constitution come into force

Q16. Who was the constitutional advisor to the Constituent Assembly at the time of the creation of the Indian Constitution?

Q17. In which system of government, bicameral system is an essential feature?

Q18. what kind of country is india

Q19. In India, the concept of single citizenship has been adopted

Q20. Which part of the constitution deals with the provisions of citizenship?

Q21. Indian dialogues are near

Q22. The Indian Constitution took the plan of the Indian Federation from whose constitution?

Q23. Who is considered the architect of the constitution of India

Q24. The Rajya Sabha is called the Permanent House,

Answer Because – It can never be broken

Q25. Constitution cannot be amended by-

Q26. When was the national emergency declared for the first time in India?

Answer none of these

Q28. We have taken the concept of our fundamental rights from the constitution of which nation of the world?

Q29. If the office of the President is vacant, then within what period it is necessary to fill it?

Q30. Which Article of the Indian Constitution gives special status to the state of Jammu and Kashmir?

This post has been made keeping in mind the preparation of government exams of all you students. we have tried to provide all the information for you in this post, if you like this post, then do not forget to share it because you have a share. We Will help to bring you the latest news and updates with accurate information. We hope that you will be satisfied with the content created by us, if you find any kind of error or deficiency, then you can give us your suggestion in the comment box or send us your suggestions.

Special thanks to https://therealschool.in/ for providing all English Grammar Exercise PDFs for all students.

Q2. Who is the father of GK?
Ans: List of Famous Fathers of the World:

Q3. What are the most important GK questions?
Ans: Important General Knowledge Questions with Answers